In your home, have you noticed you have great home WiFi in your daughter’s bedroom but not in your sons?  Or maybe your home office works fine on Wi-Fi to check emails. Still, when you try watching BBC iPlayer on a Smart TV, the TV plays the annoying rotating circle indicating buffering, weak signal strength and overall a poor WiFi experience?

It is unfortunate that wireless router hardware issued by big broadband providers can be of poor quality and is inadequate to cover an entire home network. It may not be your internet connection is to blame.

In addition to this, your home Wi-Fi may be unable to intelligently adapt to compensate for Wi-Fi from your neighbour’s homes or other surrounding buildings.  Poor performance and Wi-Fi issues are widespread.

Now imagine a school with 30+ iPads in a classroom and 30+ laptops in the room next door?

Classroom365 provides managed WiFi solutions that work using the latest high speed wireless technology, ensuring this is not only viable but works, guaranteed. We have been doing this for over ten years for schools across London and the South East. 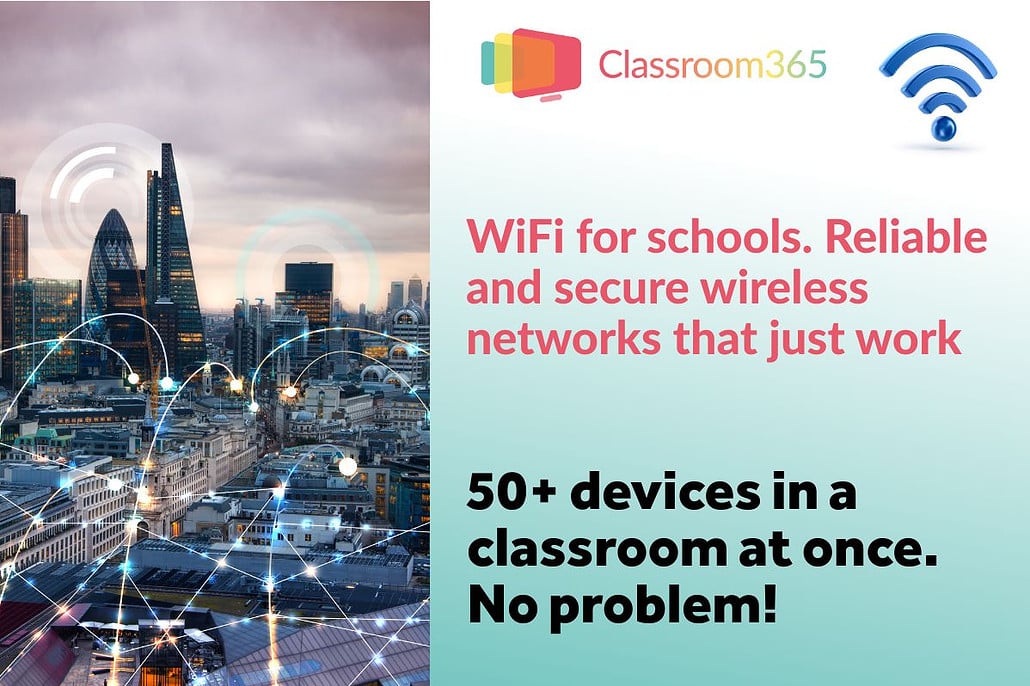 A New School WiFi Installation by the WiFi Specialists at Classroom365

A school is not just much bigger than a home; it’s often the case that it is an old building constructed in a certain way, with materials that block WiFi signal strength completely.

The WiFi for schools network must be secure and reliable. Students and teachers benefit from minimal disruption to class lessons, with stable WiFi solutions now being an integral part of a school’s ICT infrastructure. Network security is, of course, of paramount importance.

While it is true that technology has helped school Wi-Fi networks become more reliable, it remains the case that the correctly chosen hardware, planning, installation, and set-up is key to a reliable school wireless network design.

Classroom365 technicians will survey your entire building using WiFi tools and practical experience and propose plans to cover the school with the best Wi-Fi coverage and the lowest possible overall cost.

This will allow teachers the flexibility to use WiFi devices in any suitable area.

Classroom365 is dedicated to the education sector, and we know what Wi-Fi solutions work and are highly recommended and what simply doesn’t.

School WiFi coverage for streaming audio and video without buffering.

By combining the right hardware choice of wireless technology, such as the optimal access point distribution and wireless controller setup, with over a decade of experience installing enterprise-class WiFi networks in educational institutions, Classroom365 can ensure sound and video can be streamed to school wireless devices without the usual issues of poor performance you may have encountered in your home or with your previous school WiFi network. Complete and reliable WiFi coverage is guaranteed with a Classroom365 WiFi installation.

You can expect an excellent experience and optimal network coverage using audio/video conferencing tools such as Microsoft Teams, Google Classroom, and YouTube, along with the most secure WiFi network security for the perfect education WiFi solution for your school. 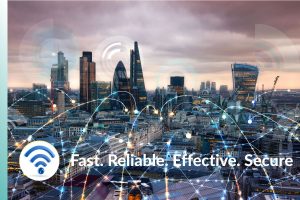 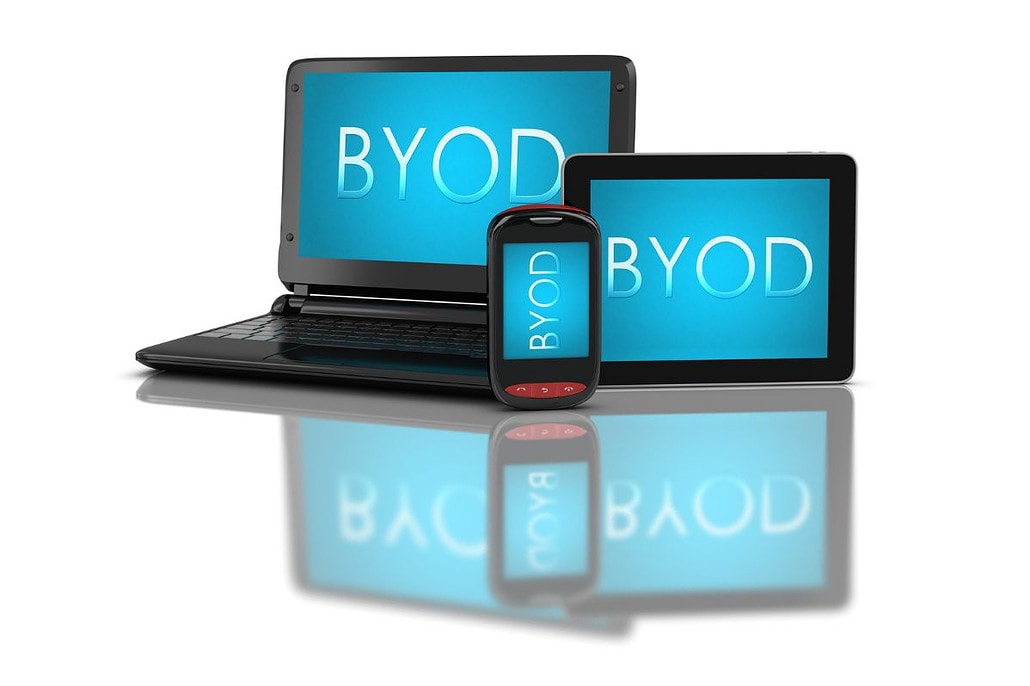 Bring your own device is now standard, with students and teachers having laptops and working or studying at home and then bringing them into school. A secure school Wi-Fi network is imperative, and network security is not compromised. A Classroom365 school wireless installation can enable wireless login and simple password changes without compromising government guidelines guaranteeing high speed and great WiFi service for school BYOD devices.

Along with iPads and other mobile devices, did you know you can wirelessly stream directly to your school’s interactive whiteboards? The latest screens have Wi-Fi functionality and can work independently from your network or the connected desktop; so that they can be used instantly.

School wireless bridge – What if a school has buildings not connected with computer wires or fibre?

Suppose you have outbuildings or even temporary buildings where getting physical cables or fibre to them is prohibitively costly or impossible. In that case, Classroom365 can install a secure, safe, reliable, and cost-effective Ruckus wireless network to other buildings via a Wi-Fi bridge. A good example would be two sites of the same school with a road running through.

Just like the central part of the school, these buildings can have connected devices such as network printers, WiFi, and other devices with or without physical cables. Network drives and other resources in the school will work in just the same way using a school wireless bridge connecting the local area network.

A WiFi in schools consultation and installation provided by Classroom365 will cover all the variables involved in setting up a secure wireless bridge. Please contact us for references across a comprehensive range of educational institutions.

The first step is to get in contact for an informal chat, and we can find out a bit of background regarding your exact requirements and your schools internet connection. We will then arrange a site visit and conduct a free school WiFi survey of your school, looking at the network infrastructure and your existing school wireless.

We will collect information and investigate:

Once completed, we will provide information, great advice and a simple, easy-to-understand Wi-Fi solutions report and quotation for your school based on our findings and recommendations.

Wireless installations for schools – what happens next?

After your free school WiFi consultation, we will provide a quotation for recommended Wi-Fi solutions for your school. This will include hardware, Wi-Fi installation and optimal wireless setup for your school as per the following:

Contact us for some free advice and a no-obligation quote.

We completed a complete infrastructure overhaul, including the wireless upgrade of this large secondary school in Southwark, South East London, within the specified budget during the summer of 2021.

There was a mixture of wireless access points around the site, all cloud-managed. Most AP’s were released in 2012, and support ended in 2016. The access points should not have been purchased past 2016 as this put a minimum age of 5 years on the product.  The maximum speed these access points reached was 450Mbps.

Our findings determined some of the older AP’s were not working and, as they were released in 2011, were incompatible with the existing cloud controller. There were many WiFi problems, and the existing WiFi installation needed urgent attention.

After upgrading, we achieved close to 850Mbps across the school, providing a wireless connection almost as good as a hard-wired connection. With hundreds of network devices being used simultaneously across the network, multiple devices now use the WiFi concurrently with robust connectivity for video conferencing and other wireless services.

We also found many access points were located too far apart to provide robust Wi-Fi around the school; the thickness and structure of the walls hindered the signal from reaching farther than the room they were in. This is all too common in Victorian schools in our experience.  Since these AP’s were current, the number of packets transmitted wirelessly had increased and subsequently, demands on the WiFi network had reached capacity.

Therefore, strategic positions across the school required a higher calibre access point running as close to 1000Mbps as possible. In many cases running Cat6 cabling back to a comms cabinet to a POE switch to power each new access point.

Ongoing management includes regular visual checks of the AP’s to ensure they function as part of our constant weekly network checks with the school’s support Service Level Agreement.

WiFi Solutions for Schools and Wireless Installation Services for London

Our School WiFi installers are DBS checked, and we are accredited WiFi suppliers to the education sector. 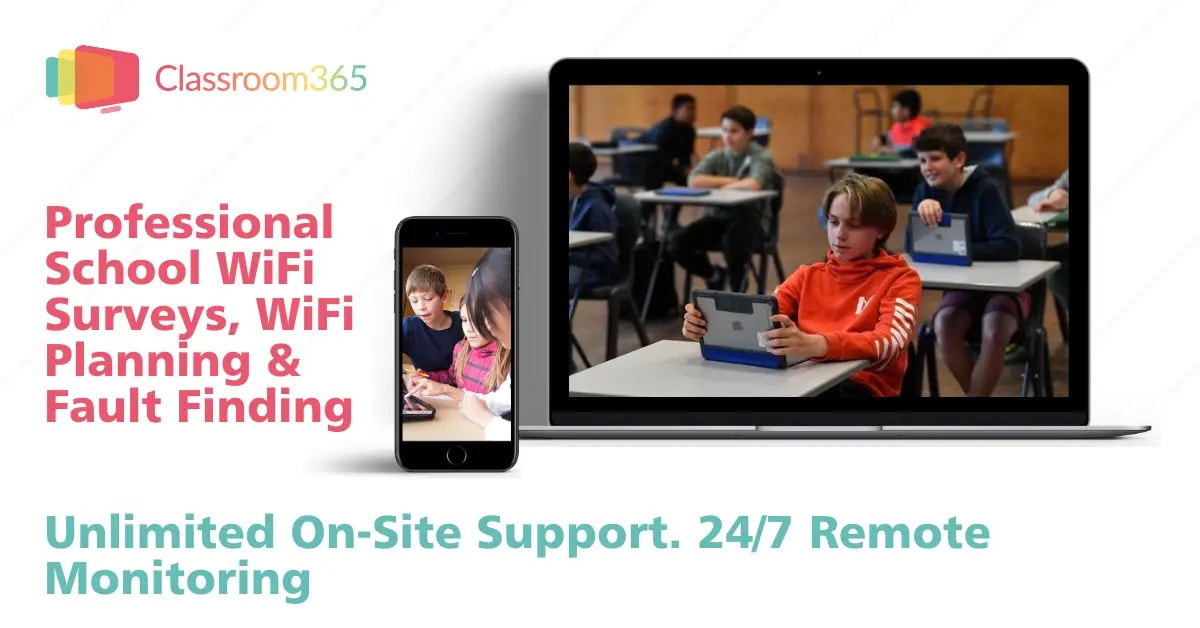